The iconic Jeep CJ – Civilian Jeep – started its history as a prototype in 1944 built by Willys-Overland. A year later, CJ-1 was born, after being tested in civilian conditions by the US Department of Agriculture.

Along with the typical open-body vehicles, the Jeep CJ series also included a compact pickup truck line for mainly commercial purposes such as the US Postal Service.

Based on the military Willys MB model, the Jeep CJ had the same characteristics: rigid live axles, body-on-frame design, leaf springs and could be driven with their doors off. This trend continued until the end of the CJ models: the basic design and shape was used during its 45 years production run. 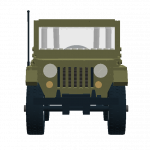 With some unique features such as a tapered front hood, flared fenders and fold-down windshield (feature still available today), the Jeep CJ is described as probably, the most successful utility vehicle ever made.

The very first in the CJ series, the CJ-1, was basically a military MB with just a few modifications: a drawbar and a tailgate were added as well as a civilian style canvas for the soft-top. Of course, all military design elements were removed or replaced (such as the headlights).

One new model stem from the CJ series, called the Jeep DJ (where “D” stands for “Dispatcher”) which had one unique characteristic: it was rear-drive only. The DJ entered production in 1956 and came with both open or closed (steel) body and was manufactured in both left and right-hand drives. It was intended for Police, hotel/resort vehicle and probably most popular, it was widely used by the US Postal Service. 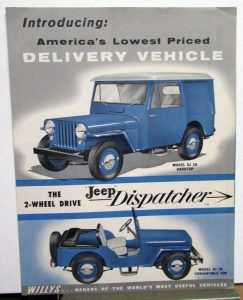 During its 45 years production lifespan, the Jeep CJ went through changing the corporate owner a few times and quite a few models. It survived the Cold War and the two gas shortages in the 70’s. With basically unchanged body style, the various CJ models were produced in record numbers. Regarded as “America’s workhorse” and with more than 1.5 million vehicles produced, the CJ was replaced in 1987 by not-so-different looking Jeep Wrangler.